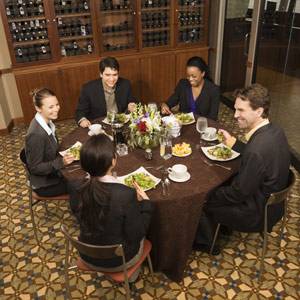 Effective business networking allows individuals to become walking, talking advertisements for one another, but it is important to choose the right networking groups and events. Often, it is better to start by choosing within your industry, within your target market or within the general group in which you socialize. It is also important to never overlook your opportunities for networking in other places, like happy hour, alumni events, dinners for organizations such as Girl Scouts, board meetings or even the gym. Sometimes the concept of networking can be overwhelming, but by making yourself open to new contacts and opportunities, many good things can come of it.

I’m a perfect example of just how beneficial taking initiative and putting yourself out there can be. As a marketing major in college, I knew I would need to obtain at least one internship before I graduated in order to gain a competitive edge when I entered the workforce. I first became familiar with Austin & Williams through the Intern Career Advancement Program (ICAP). I spoke with Kim Brussell, who was representing the agency that evening and kept in touch with her over the remainder of my college career. After timing issues prevented me from taking an internship at the agency last summer, our constant contact leads me right back one year later to fill the position of Account Coordinator. This goes to show that you never know when an initial encounter can be a life-changing experience and to never give up on something when you know it’s right.

Timely and consistent follow-ups lead to successful networking. Meeting someone once will rarely bring about new business, but repeated contacts often do the trick. As social media continues to become a major component of marketing, businesses should incorporate applications such as Twitter, Facebook, LinkedIn and Yahoo Groups as outlets for business networking. You never know when someone else will re-post something you wrote, or how many of their acquaintances will see it and then continue to pass the information along. This can lead to endless referrals and increased business as well as traffic to your company web site with a few well-placed links.

Do you participate in any networking groups? What have you gained from the experience? Does your business implement social media as a networking tool? If so, have you seen results?