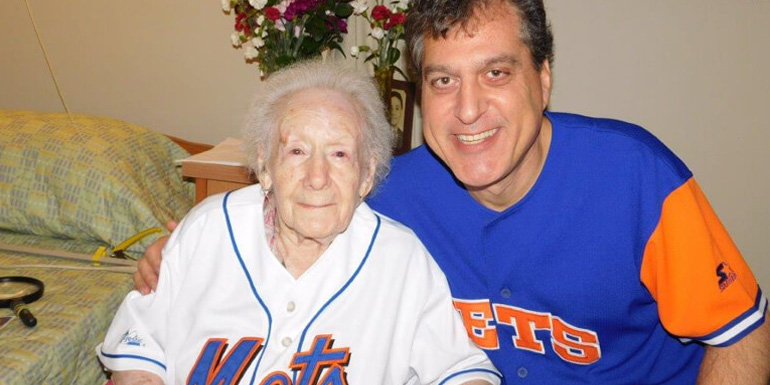 In celebration of the New York Mets Opening Day of the 2017 Major League Baseball Season this past April, Austin & Williams worked with client Gurwin Jewish Family of Services to celebrate 101-year-old Gurwin resident Rudal “Rudy” Ahlen’s love of the New York Mets and showcase the vibrant atmosphere at Gurwin.

Rudy was featured in a story in Newsday, McKnight’s Long Term Care News and in a TV report on News12 Long Island, among others.
Ahlen has been rooting for the New York Mets since she was a young girl. Originally a Brooklyn Dodgers fan, Rudy switched allegiances when the “Bums” moved to Los Angeles. “I was so mad!” the mother of eight recalls. But ever since, she has remained faithful to her “Amazins.” She’s a player herself—and was the only female on an all-male seniors’ baseball team on Long Island in her earlier days.

Rudy doesn’t just love the classic lineups of 1969 and 1989. She can tell you the batting average of every current player, the ERA of the pitchers, and which rookie players are poised to have a breakout season. Game days are spent glued to her TV, keeping score and second-guessing decisions made by the Mets coaches. Her favorite player? David Wright, of course, because not only is he a good third baseman. “He’s such a good looking guy!”

As a result of the news coverage secured by A&W, the Mets invited Rudy and her family to a game on June 1!