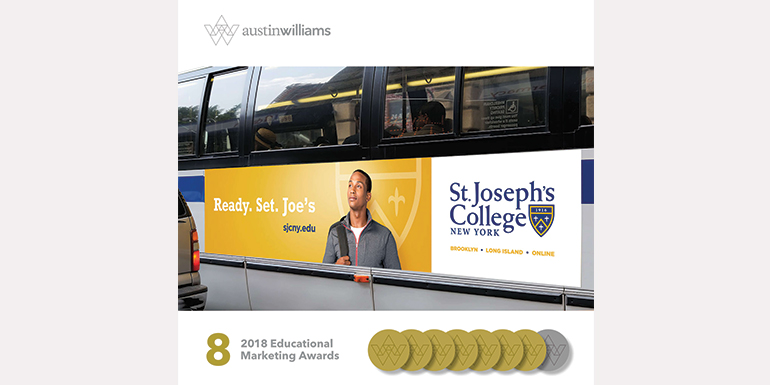 “‘Ready. Set. Joe’s’ really captures what makes St. Joseph’s College stand out: The passion St. Joe’s shares for preparing students for tomorrow’s career opportunities,” said AW President Eva LaMere. “What makes it such a great concept is that it’s one only SJC can own; not just because of its creative execution, but because it leverages SJC’s impressive, forward-looking programs and accomplishments.”

This year’s award-winning campaigns were created by the same Austin Williams team that brought home three gold, a silver and a bronze medal from the EAA in 2017.

“We were passionate about this campaign from the moment we thought of it and are thrilled that it has been met with such success, both for our client and with this year’s judges,” said Rick Chiorando, CEO and chief creative officer of Austin Williams. “It’s also validation of our expertise across multiple forms of media, to advance a comprehensive strategy that produces results and drives response.”

The “Ready. Set. Joe’s” campaign was launched in fall 2017 with print, out-of-home, digital and radio campaigns. A corresponding TV campaign launched in early 2018 in local markets on Long Island and in Brooklyn and Queens.

“We are thrilled that our new campaign is being recognized for its overall creativity, which was brilliantly articulated through AW’s aspirational vision,” said Jessica McAleer Decatur, SJC’s vice president for marketing and communications. “‘Ready. Set. Joe’s’ captures the excitement and personal attention every St. Joseph’s College student receives at our three distinct campuses by allowing us to communicate and tie together the comprehensive messaging for our one singular mission.”

Images and artwork for the “Ready. Set. Joe’s” campaign are here.

The Educational Advertising Awards is the largest, oldest and most respected educational advertising awards competition in the country. This year, more than 2,250 entries were received from over 1,000 colleges, universities and secondary schools from all 50 states and several foreign countries. Fifteen institutions were recognized by the judges as a “Best of Show” winner. Gold awards were granted to 307 institutions, silver awards were awarded to 207, and bronze awards were awarded to 159 institutions. A complete list of the winners is available here.

Austin Williams is a full-service marketing, digital and public relations firm, creating ideas that inspire action for clients in the healthcare, higher education, financial services and professional services industries. Certified as a Women Business Enterprise (WBE) by the State of New York, the Long Island-based firm was founded in 1992 and was named one of the 100 fastest-growing agencies in the nation. In 2017, it was listed as a “Great Place to Work” by the institute that creates the annual Fortune 100 Great Places to Work list and received distinction as a member of the Inc. 5000.