By Kim Brussell In

As parents of two teenagers, my husband and I are often amazed (and sometimes even enlightened) by their views of the world.

They seem to have an opinion on everything, and while we are happy that we raised two individuals who are confident enough to express themselves, there are days that we wish they’d hold their tongues. This became the springboard for what I have dubbed “The Mommy Strike.”
Last weekend started as any other, running these very active youths to Sweet Sixteen parties, sports practice, the mall for a last-minute party wardrobe change, volunteering, etc. But by Sunday afternoon, I personally had heard one too many opinions and complaints and was tired of not having seen the floors of their rooms – floors hidden beneath dirty laundry, leftover snacks, empty water bottles, gum wrappers and even clean clothes that had been carefully folded just days earlier – in what seemed like weeks. 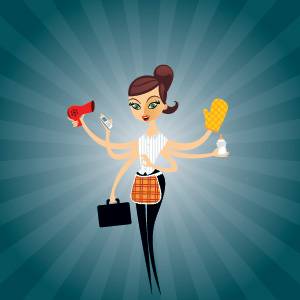 So, what was any doting mother, who was just plain tired of being underappreciated, to do? Go on strike.

Now, if you know me, this is a big deal for my house because I’m one of those moms who feel the need to do everything. But, that Sunday afternoon I announced that there would be no more laundry service, lunch making, or wake-up calls beginning the next day. I also shared that I’d make dinner if I felt like it, come home whenever I wanted to and basically would now be living like a single woman.

Well, our 14-year-old son was horrified and declared there was no way I could do that. Of course, I told him to just watch me. Our 17-year-old daughter, who is convinced she knows everything, took it pretty much in stride other than the fact she was sure it was brought on by her younger brother and certainly not by anything she’d done. My husband, well, I think he wasn’t quite sure if I had completely lost my mind or if this was the start of menopause – which was clearly going to be a very long journey for him.

I don’t think I’ll ever forget the looks on their faces that night, when at about 7 p.m., there was no dinner on the table or preparation underway. I just sat on the couch reading the Sunday paper like it was 10 a.m. Eventually, my husband decided some dinner was in order and pulled out the griddle to make our traditional silly dinner – pancakes.

Monday morning came and at 6:10 a.m. I heard some rustling around and, sure enough, those sleepy bodies made it to the breakfast table on their own. My son had packed his lunch the night before. My daughter decided she’d buy lunch. Laundry came into play by Tuesday, but they seemed to work out a system where they’d do each other’s wash. One washed; one dried and folded.

It’s been over a week now and they’ve managed. In fact, I think it’s even brought them closer together because they need to act as a team. No one has run out of clean socks, no one has missed first period and they haven’t gone hungry. Actually, I’d deem this “experiment” a success, and I don’t think I’ll be going back to waking them up for school, packing their school lunches or doing their laundry any time soon!

Has there ever been a strike at your house? If so, which end were you on?