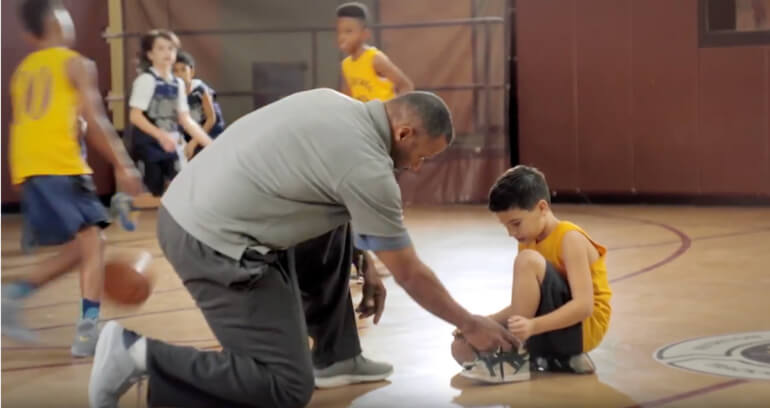 The spots, which have been produced in 30-second and 60-second versions, celebrate the values of the Ocean Financial community, by presenting fictitious characters in familiar situations who step forward to make a difference in the lives of the people around them.

In the first spot, titled “Hoops With a Heart,” the coach of a basketball team of elementary school aged children notices one of his players is wearing sneakers that are old and ragged. He takes it upon himself to visit the sporting goods store, where he purchases a new pair of sneakers with an Ocean Financial-branded credit card, and surprises the boy by placing the sneakers in his gym locker before a game. The spot ends with the smiling boy joining his teammates on the court wearing the new sneakers.

In the second spot, titled “Cooking for Good,” a volunteer at a community soup kitchen sees the critically important commercial stove give out, stopping meal service to the people who depend on the generosity of the center for food. The volunteer visits her local Ocean Financial branch to secure a loan to purchase an upgraded replacement stove to serve the needy people who depend on the facility for a daily meal.

Both spots end with the voiceover, “Isn’t It Time We All Spread the Love?” which is based on a research-defined brand truth for OFFCU that centers on the nonprofit financial institution’s Catholic values, which drive a deep respect for the people and community it serves.

“We wanted to bring the mission of the Ocean Financial community to life by demonstrating an example of the values they live and breathe every day,” said Austin & Williams CEO & Chief Creative Officer Rick Chiorando. “The ads are mini stories that embody the good that Ocean Financial makes possible for its members to give to the people around them.”

“These are fictional stories, but we’ve known members who have done similarly generous things,” said Joseph Garay, CEO of Ocean Financial. “It’s a terrific expression of who the Ocean Financial family is and the way we support each other when someone needs it.”

The ads will run on Cablevision and vViamedia on Long Island during primetime network programming including A&E, AMC, HGTV and CNN. The ads were also published as online pre-roll served to targeted geographic and demographic audiences.

The ads are also viewable here.

Ocean Financial, headquartered in Oceanside, NY, provides exceptional financial products and services to the Catholic community. With branches in Oceanside and Seaford, Ocean Financial was chartered in 1969 by a small group of members at the Father Joseph O’Connell Knights of Columbus (Council #3481), and today is the fourth-largest Catholic credit union in the country, with more than 14,000 members and $314 million in assets.

Austin & Williams is a full-service marketing, digital and public relations firm, creating ideas that inspire action for clients in the healthcare, higher education, financial services and professional services industries. Certified as a Women Business Enterprise (WBE) by the state of New York, the Long Island-based firm was founded in 1992 and was named one of the 100 fastest-growing agencies in the nation.