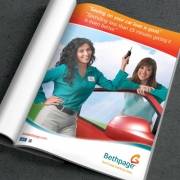 If you haven’t seen the Dove “Real Women” ad, you’ve been living under a rock. The powerful campaign has made its viral way around Facebook, Twitter, Mashable and Buzzfeed, among other sites. In a social experiment that feels part therapy session, part wake-up call, Dove explored how women view their own beauty in contrast to what others see. A forensic artist, who never sees his subjects, first sketches women as they describe themselves to him. These women are then described by strangers they only met a few minutes beforehand. The sketch artist then hangs the two portraits side by side – and the differences between the two are astounding.
In every case, each woman described herself in more harsh, critical terms than the nearly complete strangers did. One woman in the ad remarks that the stranger-described portrait looks “softer.” So why do women judge themselves so harshly? The video shows the women remarking about their looks: “My mother always told me I had a large chin.” “I would say I have a fat face.” These are not esteem-boosting self-monologues. Furthermore, Dove says that only 4% of women around the world consider themselves beautiful (no word on how many of those are confirmed Victoria’s Secret and Sports Illustrated swimsuit models).

And why is this reality of women feeling bad about their bodies so pronounced? As advertisers, we surely share some of the blame for American women’s low self-esteem issue. But are advertisers the instigators of this epidemic or just the carriers of the messages women are expecting to hear? Magazines and other ad campaigns have tried using “real” models to mixed effect. An image of mannequins used in a Swedish store went viral because they are more full-figured than the industry standard. This made the headlines worldwide. Certain countries have banned too-thin models or created standards by which runway models must comply. Yet, critics of these “real people” ads point out that these “real people” ads place more emphasis on the model (who’s literally supposed to blend in the background) than the product being sold, whether it’s a shirt, pants, shoes or a car. Magazine editors lament that designers only send certain sizes of clothing for fit models, perpetuating the “skinny model in magazines” trend. And it has yet to be seen if using realistic models translates into more consumer dollars spent on products.

I think what’s so powerful about the Dove “Real Women” ad campaign is the all-encompassing effect it’s had on many women young and old. I’ve lost count how many Facebook friends have posted this on their walls. No matter what your stance, you’d have to agree that Dove created a viral campaign for the ages.

Naturally, if something is popular enough on the Internet, you only need to wait a day or week until there’s a parody. You can watch Dove Real Beauty – Men here.