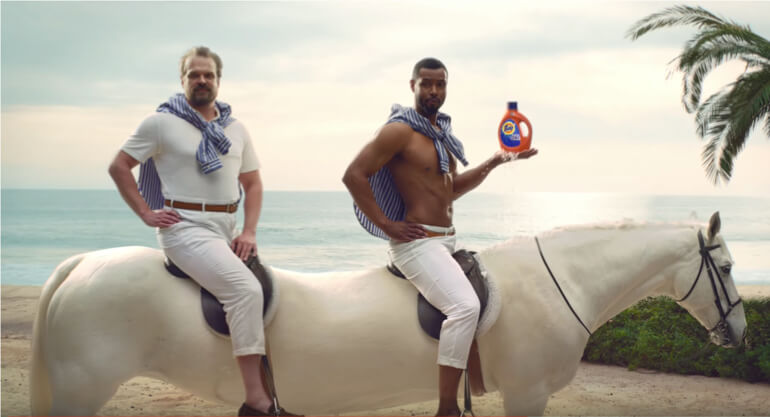 It’s that time of year once again when the Auld family gathers around the television on Super Bowl Sunday to give our thoughts on the latest batch of commercials. Leading into this year’s game, the word around the industry was that there would be less politics in this year’s ads and more humor. This year, we did get our share of humor as well as plenty of inspirational ads from Toyota, T-Mobile, Budweiser and Verizon. However, the Aulds are all about the funny, and here’s a rundown of the ads that stuck with the Auld clan.
M&M’s “Human” – We loved seeing the Red M&M become Danny DeVito, even if I had to explain to the kids who Danny DeVito is. This one scored big in our house.

Doritos/Mountain Dew’s Morgan Freeman vs. Peter Dinklage Rap Battle – This was a fun spot, but I think the rap battle ended in a draw. Hopefully, there’ll be a rematch one day.

Tide’s “It’s a Tide Ad” – We loved how we kept getting faked out by David Harbour from “Stranger Things.” The fact that Tide pulled one over on us a few times kept us on guard for the rest of the game. This campaign brought back memories of the old Energizer Bunny campaign in which the Bunny would roll through unrelated ads. We also got faked out by the Australian Tourism Board’s non-movie trailer for the upcoming “Dundee.”

E-Trade’s “This Is Getting Old” – We laughed, but then grew a bit sad thinking we might be singing, “I’m 85 and me want to go home” one day.

Amazon’s “Alexa Loses Her Voice” – I would give anything to have Leslie Jones become the voice of my Alexa.

Those were our favorites. On the flipside, we felt the “Dilly Dilly” spot from Bud Light fell flat, especially considering the campaign has been a hit up to this point. And we’re still trying to figure out the point of that Diet Coke spot. Overall, it was just a decent year for the ads, but nothing that will make a “Best of” list. Now, it’s onto the Winter Olympics!