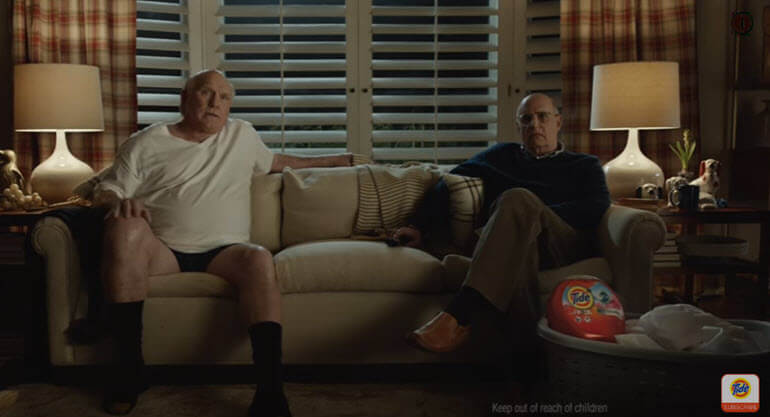 The Patriots and Lady Gaga were the biggest winners of Super Bowl LI, at least for the Auld family. Most advertisers played it safe and straight, so for the first time in recent memory, the game actually outperformed the ads. Some advertisers won minor victories, at least according to the almost-famous Auld family annual review of Super Bowl commercials. (Read the recaps for XLVIII, XLIX and L.)
In my house, Kia’s ad with Melissa McCarthy’s imitation of Wile E. Coyote as a perennially suffering activist scored big time. Between her Saturday Night Live appearance the night before and this Kia spot, this weekend belonged to McCarthy. The social awareness theme was prevalent with companies like Coca-Cola, Budweiser, Google and 84 Lumber in highlighting different social issues. I thought Audi’s #thinkprogress campaign was particularly spot on with its gender equality message.

What I most looked forward to was the live Snickers ad—and it did not disappoint! With Snickers teasing the live stunt in the days leading up to the Big Game, there was plenty of potential for it to fall flat on its face. But the timing of everything was perfect—and hilarious. After this success, I wouldn’t be surprised if we see a few more of these live spots in upcoming Super Bowls.

Honda scored a winner with the celebrity yearbook photos. The only issue with their spot: If you weren’t paying attention and missed their logo at the beginning of the ad (easy to do in a house full of kids), you wouldn’t have known it was a spot for Honda at all. Tide’s spot featuring Terry Bradshaw and Jeffrey Tambor was a nice throwback to when Super Bowl ads were all about spectacle. The callback in the fourth quarter was a nice touch.

One thing that did surprise was a lack of ads that we would have ranked as “absolutely awful.” Even GoDaddy seems more focused now on selling an actual product rather than grossing out the audience. But though the ads thankfully avoided one-upping each other in outrageousness, the pendulum swung too far. They were boring. For $5 million per 30-second spot, perhaps advertisers felt they needed to play it safe when it came to clients’ cash. But that left us ad fans feeling like these spots could have aired at any ol’ time during network primetime. Some advertisers fumbled their $5 million, while others turned over what could have been a tired joke (“Look! Christopher Walken is reading lyrics like they’re serious lines again!”) into something kinda funny.

Perhaps the biggest letdown was the lack of a Doritos spot—and my family, for one, missed it. Doritos commercials have been consistent in their entertainment value. Here’s hoping they’ll be back at Super Bowl LII. Heinz also sat out this year, opting instead to give their workers the Monday off following the Super Bowl. My question: What was a better return on their investment? The campaign for “Smunday” to become a national holiday or another run-of-the-mill condiment ad that I’d forget once the Vince Lombardi trophy was hoisted overhead?

Overall, much like the Falcons, the commercials raised my expectations before dashing my dreams for a truly memorable Super Bowl commercial experience.