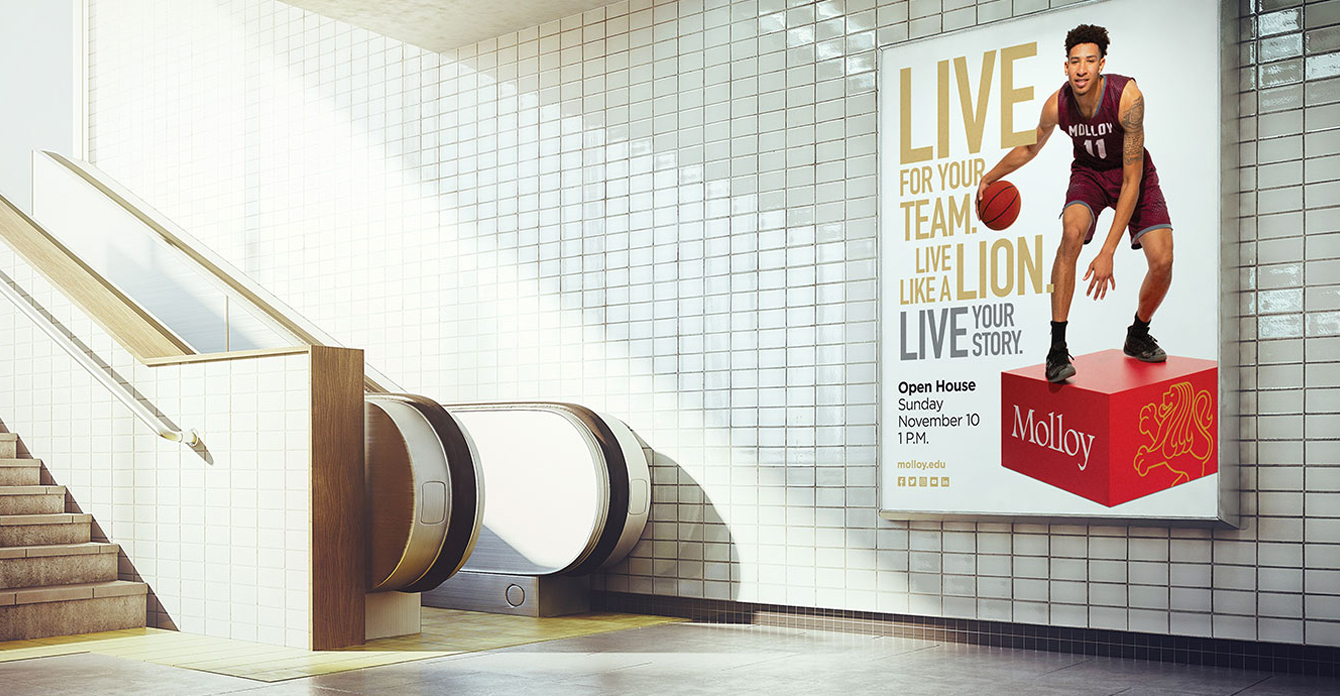 Austin Williams has created a new ad campaign for Molloy College that brings its brand to its next level.

The campaign centers around The Box, an elevated red platform that stands (literally) as a metaphor for the solid foundation a Molloy education provides. The Box is at once a launchpad to success, a podium celebrating accomplishment, a platform upon which to express ideas, and a stage to express individuality.

The Box also is a powerful element that projects the modern evolution of the Molloy brand: one that exudes strength and confidence while retaining legacy elements. With a Molloy wordmark on one face and a stylized “OutLion” icon on the other. The OutLion design is extracted from Molloy’s previous shield mark, presented in a simplified, minimalist and more modern fashion.

“This is a multi-faceted campaign and the culmination of a year of work from the original concept to the final campaign,” said Bryan Hynes, Creative Director for Austin Williams. “This is a literal storytelling platform to allow Molloy to articulate the ‘Live Your Story’ tagline to students, prospects, faculty, alumni and other stakeholders.  It’s an iconic piece of imagery comes alive when someone stands on top of it and becomes the person they have set out to be – that can then also travel to different locations to other contexts and environments to change its meaning, while maintaining the same brand presence strength.”

The vision for the campaign came together in a multi-day photo and video shoot at Molloy College, where a small army of subjects and technical staff, led by director Naomi Hogarty, owner of 91 East, created and captured the soon-to-be iconic images that would drive the campaign.

“What makes a great campaign is a great production, and pushing the envelope a little bit,” said Hogarty. “I think it’s important to give everyone on set the space to bring to the table that special something they have. It elevates the production. It’s a collaborative effort.”

In its multimedia campaign, a full spectrum of archetypes from the school community are represented in portraits on The Box. From undergrads to athletes, from nurses to teachers, from musicians to working-mom MBAs. Each striking silhouetted image is paired with bold “Live” statements that encourage student prospects to “Live Your Story” at Molloy.