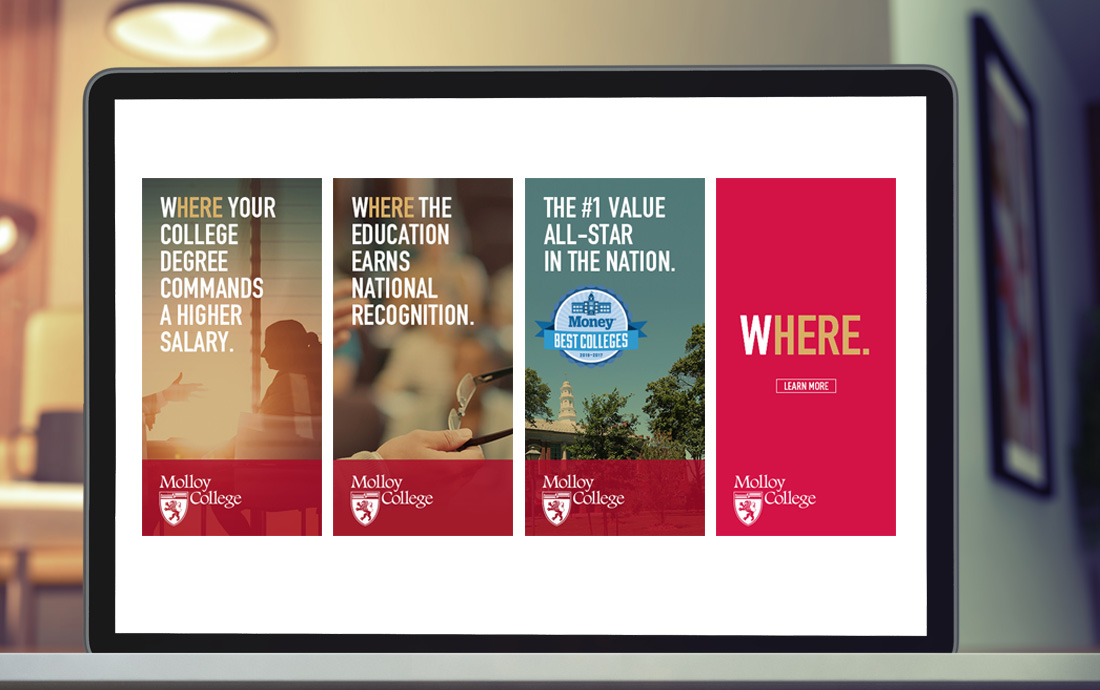 Molloy College received a gold medal in the TV Single category, a bronze medal in the Total Advertising category and an award of merit in the Integrated Marketing category for the campaign “Where. Here.” The campaign combined branding, print ads, broadcast, outdoor, digital and website work to leverage the college’s ranking as Money® magazine’s #1 Value All-Star in the nation. This was the first phase of a new strategy designed to elevate the Molloy’s brand and generate awareness of this prestigious accolade to a more expansive audience of influencers.

“We handed Austin & Williams a challenging assignment and they delivered brilliantly,” said Ken Young, Assistant Vice President, Marketing and Public Relations at Molloy College. “Our hard-earned ranking by Money® magazine was an opportunity that we couldn’t let slip—and Austin & Williams helped us take full advantage of it to drive our enrollment and our national reputation.”

TCI College of Technology received gold medals in the Total Recruitment and Total Advertising categories and a silver medal in the Integrated Marketing category for the campaign “Get to TCI.” The campaign leveraged digital, direct marketing, email marketing, outdoor and a website to deliver a strong enrollment strategy that would drive in students even faster. Austin & Williams created a campaign that, within eight weeks of launch, drove more than 5,850 qualified leads, yielding a cost-per-acquisition of only $144.02—42 percent below the industry average.

“Standing out in a city as crowded as New York isn’t easy, and competing for students who have their choice of multiple colleges can be daunting,” said Dr. George Santiago, President of TCI College of Technology. “As we evolve into a college for a new generation of student, we know the strategy Austin & Williams has given us will serve us well into the next phase of our growth.”

This year’s award-winning campaigns were created by the same Austin & Williams team that brought home three gold, silver and bronze medals and a Best in Show award from the EAA in 2016.

“We are elated to again be recognized for our compelling and creative work on behalf of our clients Molloy College and TCI College of Technology,” said Rick Chiorando, CEO of Austin & Williams. “Awards like these only happen as the result of a true agency/client partnership, hours of hard work and dedication to our clients’ goals. We are thrilled for them and for us.”

The Educational Advertising Awards is the largest, oldest and most respected educational advertising awards competition in the country. This year, more than 2,250 entries were received from more than 1,000 colleges, universities and secondary schools from all fifty states and several foreign countries. A complete list of the 2017 winners is available here.

Austin & Williams is a full-service marketing, digital and public relations firm, creating ideas that inspire action for clients in the healthcare, higher education, financial services and professional services industries. Certified as a Women Business Enterprise (WBE) by the state of New York, the Long Island-based firm was founded in 1992 and was named one of the 100 fastest-growing agencies in the nation.